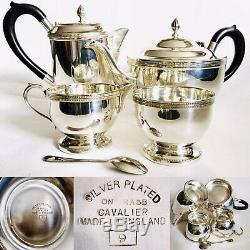 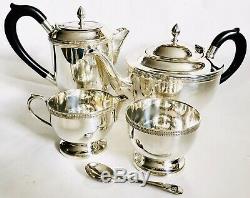 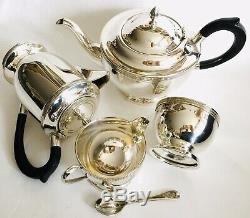 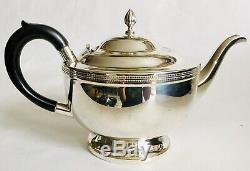 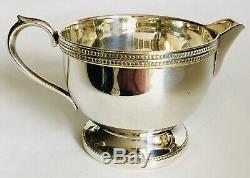 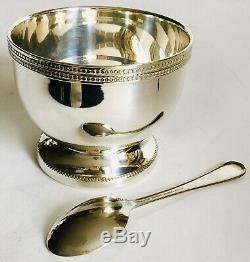 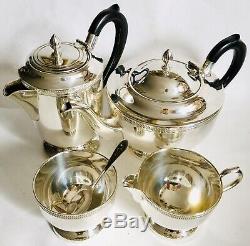 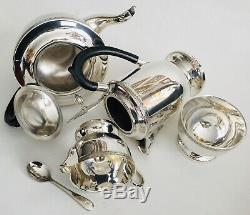 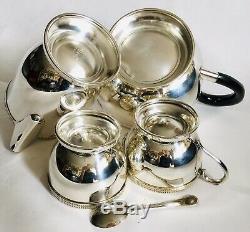 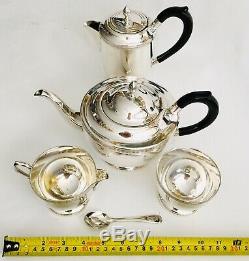 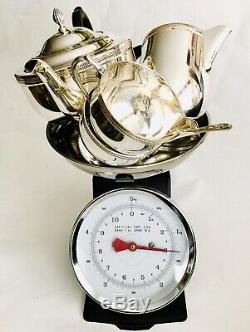 (If you require a good quality tray please advise as I also have some beautiful silver plated trays and will do my best to work you out a good deal). Please browse all 12 photographs for size, weight and condition as they are self explanatory. Lovely condition without any damage.

The only thing to report would be the slight wear of the silver plate to the inside of the creamer, otherwise Its in very good general condition. Needs to be seen and handled to be fully appreciated.

Cavalier silver plate was made by Gorham USA. The Gorham Manufacturing Company is one of the largest American manufacturers of sterling and silverplate and a foundry for bronze sculptures. Gorham Silver was founded in Providence, Rhode Island, 1831 by Jabez Gorham, a master craftsman, in partnership with Henry L. The firm's chief product was spoons of coin silver. During the heyday of American silver manufacturing, approximately 1850 - 1940, Gorham was highly influential. The company also made thimbles, combs, jewelry, and other small items. In 1842, the Congress enacted a tariff which effectively blocked the importation of silverware from outside the United States, which aided the American silver industry.

Jabez Gorham did not take full advantage of this opportunity, but in 1847 Jabez retired and his son, John Gorham succeeded him as head of the company. John Gorham introduced mechanized production methods, enlarged the premises in downtown Providence, improved the designs, and expanded the product line. In 1852, Gorham toured many of Europe's silver workshops and manufacturers, speaking with individual specialists, including master craftsmen and toolmakers. He sought highly skilled foreign workmen to train his American workers and hired George Wilkinson, a premier designer and workshop manager, from England. In 1865, the Rhode Island legislature granted a charter in the name of Gorham Manufacturing Company and in 1890, the company relocated to a factory on Adelaide Avenue in Providence.

Codman, one of Gorham's most noted designers, created the Chantilly design in 1895, which has become the most famous of Gorham's flatware patterns. The company has produced matching holloware in both sterling and silverplate. In 1884, the company opened a store in the Ladies' Mile shopping district in Manhattan, New York City, but moved in 1905 to a Fifth Avenue building which it commissioned from architect Stanford White. Textron began planning to sell the unit in 1988, completing the sale in 1989 to Dansk International Designs. Brown-Forman Corporation acquired Gorham from Dansk in 1991.

However, in 2009 Lenox Group filed for Chapter 11 bankruptcy and it was subsequently acquired by Clarion Capital Partners, now operating under the name Lenox Corporation, which has three operating divisions, Lenox, Dansk, and Gorham. The White House has used Gorham silver services during many administrations. The tea service was presented to the National Museum of American History in 1957.

Grant asked Gorham to commemorate the country's one-hundredth anniversary with a spectacular Century Vase that contained over 2,000 oz (57,000 g) of sterling silver, and in 1899, it produced a grand "loving cup" composed of 70,000 dimes was designed for Admiral George Dewey. The opulent 740-piece service represents Victorian era dining at its most elaborate. The monumental silver and parcel-gilt "Neptune" epergne made for Furber as part of this service was displayed at the Philadelphia Centennial Exposition in 1876. Textron donated a large portion of the service along with other pieces to the Rhode Island School of Design Museum and they are on display in the permanent collection of American decorative arts. In 1907, Gorham created an elaborate silver service for the battleship USS Rhode Island.

It is now on display in the State Room of the Rhode Island State House. Bush family chose Gorham's Chantilly as the flatware service on Air Force One. In 1921, the company bought the rights to the The Hiker, a statue by Theo Alice Ruggles Kitson. It commemorates the American soldiers who fought in the SpanishAmerican War, the Boxer Rebellion and the PhilippineAmerican War. Over the next 44 years Gorham cast at least 50 Hiker statues.

[18] A copy can be found in Providence's Kennedy Plaza, and there are several in nearby Massachusetts towns including Lynn, Wakefield, Haverhill, Taunton and Fall River. Gorham artisans also sculpted the famous monument of George Washington in the Capitol's Rotunda, the statue of Theodore Roosevelt that overlooks the Museum of Natural History in New York, and the famous Independent Man which tops the Rhode Island State House. Gorham designed a number of elaborate trophies for sporting events, including the Borg-Warner Trophy for the Indianapolis 500, designed by Robert J.

Remarkably Gorham salesmen did not carry samples but just great books with full-size photographs - a long description of how Gorham's factory worked (they made sterling and electro-plated goods) is given here also. Gorham maintained their Birmingham factory until WWI and was a large exhibitor at the Jewellers Exhibitions of 1913 and 1914.

The seller is "santoor-uk" and is located in Eccles, Greater Manchester. This item can be shipped worldwide.